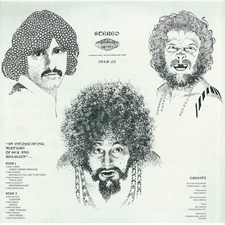 Really.  It’s a waste of breath.  It only confuses her further.  Who needs the stress?

She does, evidently.  She can’t grasp why there are copies of Endle St. Cloud’s Thank You All Very Much on the long-defunct International Artists label being sold on Amazon as CD’s and MP3’s.  Or what an MP3 is, or why anyone would name a business Amazon, but don’t get me started.

Endle St. Cloud, aka Alan Melinger, is her elder son, making him my elder brother.  He died in 1987, and this recording was produced nineteen years previously.  It was the last LP produced by International Artists, which folded in 1971.  Since then, IA’s catalog has been issued, re-issued, and sliced ‘n’ diced around the Internet for over forty years by rabid fanboys, many of them in Germany.  Go figure.

I take a deep breath.  I guess I have no choice but to wade into this thing.  “Mother–”

“Aren’t they afraid of getting sued?”

“OK.  Mother.  Let me tell you what the Internet is not.  It isn’t a corporation, like Warner Brothers, with its own liabilities and legal department.”

Hoo boy.  This woman has never been online.  She was fifteen years old before she had indoor plumbing.  Twenty-one before having a phone in her home.  Thirty-two before owning a black & white television set.  This won’t be easy.  Perhaps an analogy…

“OK.  Think of the Internet as being one long piece of paper.  So long it stretches around the world.”

“Oh, that’s just ridiculous.”  She thinks I’m making this up, like there is any earthly reason for me wanting to do so.  “But you can’t just write anything.  You would get sued.”

“Who would you sue?  How do you sue a piece of paper?”

“But how can they sell something they don’t own?  Surely they can get sued for that.”

I consider going into the economics of comparing the cost of litigation to the potential benefit of recovering a few pennies per unit, where 25 = the number of units sold worldwide over the last thirty years and zero=the amount the artist was legally entitled to in the first place, assuming the record company still exists, which it hasn’t for forty years.  Instead, I simply say “It’s not worth it.”

“Look, Mom.  There is no international cabal of sinister figures making millions off IA’s back catalog.  There’s just a handful of fanboys who were drawn in by bands like the Thirteenth Floor Elevators, bands with some notoriety, and then they got interested in the whole catalog because they are completists.  So now they must have everything IA ever produced.”

“Oh, I don’t believe that for a minute.”

Time to resort to desperate measures, or we’ll be here all night.  “OK Mom, I’m googling Endle St. Cloud.  There.  I got 24,000 hits.”  I can sense gears grinding across the phone line, because she hasn’t a clue as to what ‘google’ or ‘hits’ are.  But I press on.  “Now I’m on a YouTube search.  Here is a song from Thank You All Very Much called ‘Street Corner Preacher’.”  I click the link, and my dead brother’s voice wails across the room, a song we both know from 40 years ago.  “And there’s also ‘Jessica’ and ‘Badge’ and ‘Who Would You Like to Be Today’…”

I don’t either, I want to tell her.  But the same digital fingers that now sift through her personal data, and mail her ads for retirement homes, the Democratic Party, and Depends,  are now helping themselves to her dead son’s music.  I have the same powerless feeling in the pit of my stomach that I had, ten years ago, when my six-year-old daughter’s beloved hamster died and she tearfully asked why.  Some things just happen.  Some things can’t be helped.

Then I remembered something she always told me.  “Mom, don’t the Jews believe that after you die, you live on in the memories of those whose lives you touched?”

“Yes, that’s what we believe.”

“Well then, this is a good thing.  People who never even met Alan are listening to his music today, maybe halfway around the world.  They are enjoying it and appreciating it in their daily lives.  So in that way, his memory is being honored and kept alive.”

Yes.  I choose to think so.