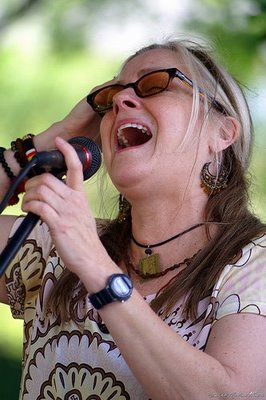 In just two weeks, it will have been three years since Tina Marsh left us.  Even though I never worked with her on her own musical projects, I did hire her for some of mine–and the AJW is much the richer for the experience.

Tina had a whole different bag than I work out of–much more cutting edge and adventurous, while let’s face it–I’m an old fogey.  But some years ago, I needed another vocalist for some dates on the Harold Arlen season, so I called Mady Kaye–who was unavailable due to other commitments.  She recommended I call Tina Marsh, who I had not worked with at that point.

“Tina?” I asked.  “I know she’s great and all, but would she even be interested in singing Harold Arlen?”  In my mind, I was still equating Tina with singers like Bjork.

So I did.  And sure enough, Tina sang the stuffing out of the Arlen material.  So much so, in fact, that I hired her again for Fats Waller, and again for Richard Rodgers.  To each one, she brought her sparkle and her commitment to making every performance shine like a jewel.

Tina worked in musical theater back in the late 1970’s.  Perhaps because of this background, she was particularly adept at improvising the humorous portions of the school shows–and she also knew how to stick to the script enough not to sabotage the gags or lose their punch.  Even though I would script an exchange with her as the straight woman, she found a way to get her licks in without diluting the intent.  This is a rare talent–kind of felt like I was working with Gracie Allen.

The AJW has worked with a lot of vocalists, and most of them are quite strong as singers–but in that ability to breathe life into dialogue you have already done 40 times, and make it new and fun each time, Tina stood alone.

“You can have baked potatoes–”

“Those are nice with chives,” she would murmur.

“OK THAT’S ENOUGH.”  By becoming fed up and interrupting me, the bit got a much bigger laugh, like she knew it would.  We kept it.

It was during the Richard Rodgers season (September 2007–May 2008) that Tina got sick again.  Her cancer had been in remission for close to fourteen years, but it came back in February 2008.  We always have several vocalists who rotate each season, so I asked Tina if she would like to stop working for a while as she was about to undergo a fresh round of chemotherapy.

She did stop, reluctantly, for a few weeks.  But as soon as the series of treatments had concluded, she was back with a vengeance.  And she continued to work for the next few months, until she eventually got too weak to perform.  I was extremely thankful to have her as long as we did, and I think the AJW shows were sort of an ideal conduit for her at the time, because a) they are only 45 minutes long, b) we set up PA so all she needed to bring was her mic and stand, and c) it was for kids, who are an energizing audience.  So on a number of levels, it was a hassle-free way to keep her working, and Lord knows Tina intended to keep working as long as she possibly could.

One of the Richard Rodgers tunes we performed was “Blue Moon”, and of course we had to have a bit of fun introducing that.  Here is how the intro was originally scripted:

Vocalist:  The next song we’re going to play is called Blue Moon.  It was the biggest hit that Richard Rodgers ever wrote, even though it wasn’t written for a show.

Vocalist: (cutting MM off) No, no, no, no.  That’s not the way Richard Rodgers wanted his song sung.  He wanted it this way. (sings beginning of tune in quasi-operatic style).

MM:  Compromise?  Right here, in front of all these people?

Vocalist:  Com-pro-mise.  You know what the word compromise means, don’t you?

MM:  Oh, I get it.  So we end up with something that nobody likes.

MM:  You really think we can pull that off?

Vocalist:  Let’s give it a shot.

OK, all well and good.  But when Tina and I started to argue about the best way to sing the song, and she hits it with the operatic treatment, her delivery wasn’t comic–it was sincere.  It was at that moment that everyone in the room became aware that Tina could pull that style off, as well.  She had a bigger bag than many of us ever knew.

Still, it was my job to bring it back to comedy.  So I’m baiting the audience–“C’mon, isn’t that corny?”–and the kids, loving a good fight, start piling on–“yeah, c’mon, too corny”–like they know what the slang word corny means–and then, quite out of the blue–

“Oh my God!”  I thought to myself.  “I have pushed this way too far.  She’s under so much pressure right now.  How the hell am I going to salvage this?”

I looked over at Tina, my eyes pleading forgiveness.  And that’s when I saw it.

OOOOH!  OOOOH!  She got me good.  And she kept the scene going, milking it.  Now I had to backpedal with profuse apologies.  “Look, your way was nice–please don’t cry–we liked it, didn’t we, kids?”

“OK, let’s compromise.”  I’m so eager to get out of this that I’m stealing Tina’s lines, to move things along.

I’m not sure whether she handed the punch line back to me, or I just took it, but whatever works.  Keep it moving.

A few weeks after that show, Tina stopped working with the AJW for more aggressive treatments, and it ended up being forever.  But I will always remember the panic I felt during that onstage instant when she momentarily stopped my heart.