You Lied to Me!

Up until the age of seven, I believed pretty much anything that I read in a magazine, or was told by an older person.  I don’t know how I stayed so gullible for so long, but I did.  I was just a trusting, sweet, innocent kid.  Nothing like the cynical, shuddering wreck of a human being decomposing now before you.

My older brother knew this, and in the time-honored tradition of older brothers everywhere, used it to his sadistic advantage.  Like when we ate at a fancy restaurant, he would point to a dish on the table and say, “Mikey, eat that!  It’s ice cream!”

A giant mouthful later, I figured out it was really whipped butter.  I guess the absence of a spoon should have tipped me off.

He Lied to Me!

They Lied to Me!

I fell for it, again and again.  Because advertisers knew exactly how to get me.  And like Charlie Brown, I couldn’t resist one more run at that football.  Then one Christmas, they struck right at my Achilles heel.  They promised to teach me HOW TO DRAW.

When I was six, my favorite thing was to draw.  I drew like a little fiend.  Unfortunately, I could only draw one thing, and it looked like this: 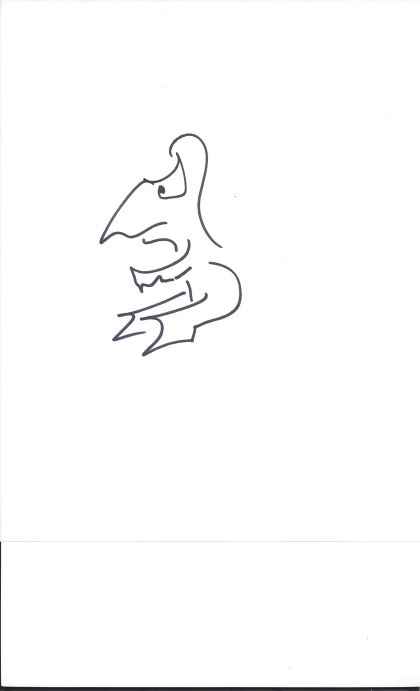 Well, you have to admit that was limited.  The good news was that I didn’t have to think so much about it.  Drawing this strange creature was an automatic response to having a pen in my hand.  In fact, given a minute or two, I could fill an entire page with them:

By the way, I hope you don’t think I was weird enough to save those drawings for fifty years.  No, I did those fifteen minutes ago.

Oh God, that makes it even weirder.  OK, not helping.

What was even more limiting was the fact that I could/can only draw these creatures facing the one direction.  So I couldn’t even create an original story line for a comic strip, unless it centered around something like, “Oh my!  What is that approaching from the left?”

So when I saw an advertisement for a sketch pad that enabled you to draw monsters (at six years old, obviously my very most favorite thing to draw), I thought to myself, “THIS I must have.  THIS is the one thing standing between me and complete fulfillment.”  And in true six-year-old single mindedness, I began to badger my parents relentlessly for said Monster Sketch Pad.

Fast forward to Christmas morning 1962.  (I know, we’re Jews, but that wasn’t a deal-breaker where toys were concerned.  Being native-born Texans themselves, my parents always found it simpler to go with the flow and avoid burning crosses.)  I got up before anyone, crept my way to the Hannukkah Bush (looks just like a Christmas tree, but without angels or the Baby Jesus) and there was a box that seemed the right size and shape for my Salvation.  The card read, “To Michael From Santa”.

The fact that it came from Santa was a good omen.  The gifts from my parents were generally sensible (read: buzzkill).  This Santa dude, OTOH, seemed to know the score.  I had also figured out that, despite his preference for only coming around on Xmas, he seemed to be a secular figure, so we could relate on that level.  I think he also shilled for Coca Cola?  Anyway, him I could talk to.  I began to cautiously peel away the paper.

“Monster Sketch P–”  Oh, to Hell with caution!  I began flailing at the wrapping as if it was Edie Adams, offering me a Muriel Cigar.  OK, we have already established that I was a strange kid.

And there it was, with a glossy sheen, cradled in my lap.  Monster Sketch Pad.

Well, I was excited.

Ignoring everything else, I grabbed up MSP and ran back to my room and into bed, armed with my markers.  I couldn’t wait to see what manner of fantastical creatures would spring forth from my magical pad.  Spreading some paper, I began making feverish strokes like a demon child.  For thirty eternal seconds I labored, and then, panting, collapsed in awe at my handiwork:

You know–don’t get me wrong, Santa–but it feels like I’m drawing just like I was before.  Not to be ungrateful or anything, but–WTF, Fat Man?

Maybe there’s something in the instructions that I was too excited to read, I reasoned.  So I crept back to the Hannukkah Bush, and there was the trampled empty box.  Oh, but wait–not really empty.  There was something inside that I hadn’t bothered to pull out in my ecstatic fervor.  It looks like–yes, it’s…monster drawings.

…for me to trace.

I didn’t want to trace somebody else’s drawings.  I wanted to create my own drawings.  I wanted Monster Sketch Pad to unlock the Talent Genie within me and unleash it upon the world.  I wanted MSP to instantly transform me into Charles Schulz, Al Capp, and Chester Gould rolled into One Indomitable Comic God!

In that instant, I learned an important lesson.  Talent doesn’t come in a box.  You have to try things, and fail at them, and try again better, and fail again better, and keep that going for years until you actually develop something worth having.  And the people telling you different are just trying to sell you something you never needed in the first place.

But try telling that to a six-year-old with an Edie Adams fixation.

Many disappointments later, I have developed something worth having–not in the world of drawing (obviously–see above), but in the world of jazz performance.  And I will be eternally grateful to Pro Tools and Auto Tune for waiting until the early 1990’s to be readily available, after I had progressed to the point where I was no longer tempted by quick fixes and trickery.

And to those multitude of bands who can only create on computers what so many others have labored to do live on stage, allow me one small observance, from the ladies of Gilligan’s Island.