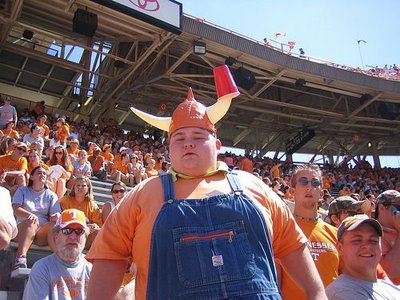 “Maybe you guys are a bit–overdressed?”

This is a gig I had almost forgotten about, but then as people started telling gig stories on Facebook’s Gigs From Hell page, it suddenly popped back into my consciousness.  Thanks a lot, guys and gals.

This wasn’t really a Gig from Hell, more like a Gig from Heck.  Still, the nature of this business is that you never know what’s going to be on the other end of the phone when it rings.

So about fourteen years ago, I’m sitting at home twiddling my thumbs, wishing they would hurry up and invent the Internet so I would have something to waste my many leisure hours on, when the phone rang.  On the other end was a young man who sounded to be about fifteen years old.  Asking if I wanted to book a gig as bandleader.

Is a bear Catholic?  Does the Pope–well, of course I’m interested.  As the Devil asked Tenacious D, “What’s the ca-a-a-a-atch?”

No catch, my junior high friend at the other end of the line assured me.  Here’s the deal:  Cadillac is rolling out a new SUV called the Escalade.  And in a month, the UT Longhorns are playing a college football game at Memorial Stadium in Austin.  So the Caddy folks are setting up a tent on Red River, just a block from the stadium, to exhibit their rollout and capture interest for people heading to the game.  Would we like to play it?

Um…sure?  Internally, I’m wondering if whoever dreamed this up has ever been to a major UT sporting event.  But it’s not my job to second-guess a client’s intentions.

“Great!” chirped my prepubescent friend on the phone.  “But here’s the deal–we want it to sound like Gerry Mulligan-style jazz.  Do you know who Gerry Mulligan is?”

I resist the urge to tell Poindexter that I have been digging Mulligan for two of his lifetimes, instead saying, “Sure.  So you want me to play bari sax?”

“Yes, the instrumentation needs to be bari sax, trombone, bass, and snare drum.”

Ah, the classic Gerry Mulligan lineup never, I thought to myself.  This is sounding more and more like strings being pulled from some faraway corporate office, by somebody who once half-listened to a Mulligan recording as a prelude to seduction.  But it’s a gig, right?  “And what does it pay?”

He said a number.  It wasn’t high enough, and I told him so.  “Hmmm, I’m not authorized to go over budget on this…”

“How about we lose the snare drum?  It won’t make that much difference to the sound, and we’re playing acoustically anyway.”  Parking lot = no power.  No snare drum = no loss.

Righty right.  Why did I even have to ask?

So on Game Day, we find ourselves deposited bleary-eyed under a tent in a corner of an asphalt parking lot, crammed to the gills with luxury SUVs.  In our tuxes, before 7:00 a.m.  Isn’t that some sort of fashion faux pas?

But we’re not alone.  They have also populated the tent with their sales force, hand-picked for the day–attractive young people, with the guys in tuxes like us and the ladies in black strapless evening gowns.  At least somebody is colder than me, I thought to myself.

I should mention that on this particular day, a norther was blowing through, playing hell with the tent flaps and any loose scrap of paper, not to mention the grit from the parking lot.  Being the professional that I am, I had anticipated this with long underwear beneath the tux.  But there’s really no way to protect your hands, which must maintain sufficient dexterity to whip through “Line for Lyons”.

So there we are, one big happy family, freezing under the tent.  Meanwhile, much warmer out in the sunlight, streams a steady parade of burnt-orange clad t-shirted UT fans.  And as they walked past and hear the cool West Coast jazz and see the booze-less cocktail party unwinding twenty feet away, you can see a single collective thought-bubble momentarily appearing over their game-fixated heads:

“What the hell…?!”  And on they would trot, barely slowing.  I think maybe a handful were snagged to fill out cards, so they could be pestered by car salesmen at a later date.  These are the same people who look forward to going to the dentist, or filling out their taxes.

The attractive young sales force, having virtually nothing to do, began preying upon one another.  We kept plugging along, playing Mulligan mainly for ourselves.  I had to admit it sounded pretty good, even though not another soul was listening (other than the musicians, of course).

For a while, it was a slog.  I mean, the futility of it, right?  We’re here to create an ambiance in an environment totally unsuited to it, like streaking on the surface of the moon.  Like swimming in a pool filled with ping-pong balls.  Like engaging in Socratic Debate at a Tea Party rally.

But at the same time, we are creating something of beauty.  Like the daisy growing stubbornly up through the cracked asphalt.  Somewhere, somehow, somebody may be appreciating it.  And who knows?  A couple of those attractive, overdressed young people could have paired off that day, gotten married, and are even now raising a family.  All that, set into motion by a trombone solo on “Donna Lee”.

I know, I know.  We ran out of Mulligan material after the first hour.  I doubt anyone noticed.