Everything I know about morality came from Shelley Berman. 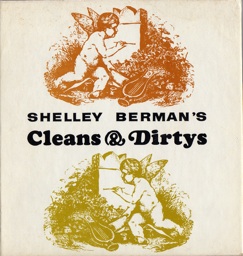 When I was ten years old, I chanced upon this book in the bottom drawer of the vanity in my big sister’s room.  The room itself had been unoccupied for four years, since she had left home to attend college at UT.  So how this book ended up there is anyone’s guess.  But there it was, next to a couple of plastic hair-rollers and a dead roach.

Growing up, our house was not big on books.  They were all sequestered in my father’s study, a small dark alcove that carried an ever-present stale aroma of pipe smoke and mouse droppings.  The books there were of two varieties: solemn, gilt-inscribed Histories of Judaism, and lighter paperbacks dealing with topical interests of the day, like The Primal Scream and The Naked Ape.  As far as I could tell, nobody ever opened a single one.

Oh, but then there were the cartoon books by Charles Addams.  These were studied for hours by my pre-adolescent mind, straining for comprehension.  Some were pretty obvious, like this one:

But others took a little more thought.  Such as:

I mean, what was a baby doing at an amusement park ride all by itself?  And wasn’t that kind of dangerous?  It wasn’t until many years later, after I got married, that I finally got it.  Sure glad my wife came along to explain this cartoon to me.

Anyway, the point is:  Since my parents were rarely at home, and I had a lot of free time because I despised things like the outdoors and other children,  it was up to me to sort all this stuff out as best I could.  So you can imagine my relief when Shelley Berman came along.  I could only assume that the reason his book was located so far away from all the others is because it contained some sort of vital information that was being kept from me until I was ready.  Well, now that I’m ten…I’m ready.

Oh, my parents were there to give me advice on all the important things, like what fork to use for the salad.  But there were so many things they left out…and I needed to know…but when you don’t even know what you don’t know, it’s hard to ask.  I knew there were lots of things I wasn’t supposed to do when out in public, but most of those were discovered through the process of elimination.  And I had the benefit of an older brother, who had done every bad behavior I could possibly think of in about fifteen minutes, and then went on to bigger, badder things.  So a fuzzy sense of morality was taking shape.  If only there was one place you could go to for all the answers…

Turns out, there was.  And it was only 92 pages long, illustrated.

At first, I had to get used to the style of Berman’s prose, which took the shape of a series of inscrutable couplets like:

Little Rock Is A CLEAN
Hot Springs Is A DIRTY

But gradually, I began to grok these Zen koans delivered from the lips of a middle-aged Borscht Belt comic.  From today’s perspective, you gotta love the Rat Pack-era double entendres, delivered with a nudge, wink, and scotch-soaked snicker.  But how much of that did I actually absorb at the age of ten?

Bupkis, it turns out.  Although I did kind of get the logic that Lake Placid is a Clean, while Lake Titicaca is a Dirty.

Berman also has a section in his book on Filthys (because let’s face it, how easy could it be to keep this thing going for even 92 pages?)  Filthys are words that are so obscene, he couldn’t even print them in 1966, when the book was first published.  So they had to be written in an undecipherable language, like this: *##!^$#@@#@!

This was news to me.  You mean Beetle Bailey’s Sarge had been cursing all these years?  And I didn’t even know it?  I had to go tell my friends right away!

Turns out, they knew.

Nowadays, of course, such a conceit seems unbearably quaint.  He would just write the words out.  But nowadays, a book like this couldn’t exist.  Everything’s out in the open!  No more mystery!  At last, all the coded language and sexual double-talk has been swept away, and we can openly communicate in plain English!

I know, right?  What a buzzkill.

So Shelley Berman only took me so far.  But it turns out there was a second book in that forgotten drawer.  I still had this to fall back on:

Look, I never claimed to be a normal kid.