A Brief Mutual Stretcher History of my Brother and my Father 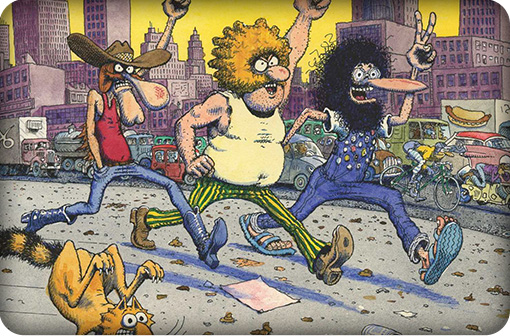 Other than the blonde hair, a pretty good resemblance.

One of the more wonderful aspects of having lived through the 1960’s and 1970’s, if you were one of those fortunate enough to survive, is the ability to look back with some degree of perspective at a period that combined innocence and debauchery in equal parts.  Consequently, our skill at rationalizing bad behavior for (perceived) positive results was unparalleled.

Of course, all those 1960’s survivors are now running the country, so you see now the end result of rampant ends/means justification.  Sorry, Millenials and your children.

I’ve been thinking about it lately because I recently acquired a copy of the Fabulous Furry Freak Brothers Omnibus, which purports to be the complete collection of the zany misadventures of our favorite countercultural icons: Phineas, Fat Freddy, and Freewheelin’ Franklin.  This trio of misfits starred in Gilbert Shelton’s wildly popular underground comic book bearing their name, born in that same heady period of “Letting it All Hang Out”.

The FFFB had but three goals in life:

As I’m reading through these strips, most of which I remember from 45 years ago, it occurs to me how much my late brother Alan Melinger reminded me of Fat Freddy, the most single-minded of the three and also the largest physically.  His linebacker bulk frequently came in handy when he had to make a split-second judgement owing to a series of bad decisions leading him down a blind alley (not a metaphor, I’m afraid).  When cornered, he could turn and charge like a bull.

There were some big differences, of course.  My brother was an intelligent man, while Fat Freddy had the IQ of a broken toaster.  But during his high-school years–or what would have been his high-school years, had he deigned to attend classes–Alan found himself adrift with a set of ‘friends’ compared to whom the FFFB were Rhodes scholars.  And as many a parent can attest, hanging with bad friends leads to bad consequences.

Case in point: one day, my brother and several of his buddies were hanging out (being truant), drinking beer (they were under-age) and smoking weed (illegal at any age, in those days).  The year was probably 1965.

They needed money, and it was hard to get a loan from your parents for the Prime Directive (yup, #1).  So they decided then and there on a solution: everyone would cut their hair and apply for jobs.

HAHA!  Of course not.  What they came up with was the time-honored alternative to working:  Insurance Scam.

Their plan, if it can even be called that, was to pile into Alan’s beater of a car (already on its last legs) and run it into a tree.  They would then collect the insurance, junk the car, and pocket the money for (you know).

Of course, Alan wasn’t dumb enough to drive the car himself.  That element of risk could have led to personal injury.  So one of his even dumber friends volunteered, probably just because said friend was crazy enough to think it might be fun to ram a car into a tree from the driver’s perspective.

Which is exactly what he did.  Then the other ‘friends’ pried him out of the wreckage, skedaddled in a second vehicle and Alan slipped behind the wheel.  One of the ‘friends’ called my father to report the ‘accident’, who called an ambulance, then drove to the scene himself.

When my father arrived, the ambulance was already there, loading my brother onto a stretcher.  They were telling him how lucky he was to make it through an accident like that without a scratch.  What are the odds?

Anyway, so my brother is being carried to the ambulance on a stretcher and looks up to see my father’s concerned face.  “I’m OK, Dad,” he says.  Then: “Gee, it’s a good thing we had insurance on that car, huh?”

“Son, you hit a tree.  Our insurance won’t cover that.”

No matter, because father and son are bonding over one of the few things they still share in common: UT Football.

Anyway, while my brother, his wife, and my parents were joining the throngs inside Memorial Stadium, my sister and I were back at her apartment, listening to Joe Cocker records and throwing the I Ching with her Armenian neighbor.  UT Football material, we were definitely NOT.

We did have an important role to play, however.  Because of the sea of humanity engulfing Memorial Stadium, we had a preordained spot to drop them off and pick them up.  The drop off went off without a hitch.

When it came time to pick them up, we had trouble finding them.  It was bumper to bumper, of course, but picking them out of the sea of humanity was proving a formidable task.  Finally, I called out, “There’s Alan!”  He was alone.

When Alan spotted us, rather than waiting for us to pull over, he just fullbacked his way across two lanes of traffic and slid into the back seat.  He was like that.  Then he said:

“Daddy had a heart attack.”

That’s not a literary effect.  It’s the actual sound of our car rear-ending the car in front of us, which had stopped suddenly.

Then everyone in two vehicles started talking at once.  It took a while to sort out what had actually happened–which, it turned out, was not a heart attack.  Rather, our father had fainted after climbing up into the nosebleed seats and had to be taken out of the stadium via–you guessed it–stretcher.

This time around, my brother was actually pressed into service as half of the stretcher-bearing team.  Whether he had the head or the foot end, I cannot recall.  But I do remember the most salient point.  By the time they finally negotiated their way past the surging crowd in the bleachers and were heading to the ambulance parked on the apron of the stadium, my father had regained consciousness.  He looked up, recognized his son, and uttered the immortal line: