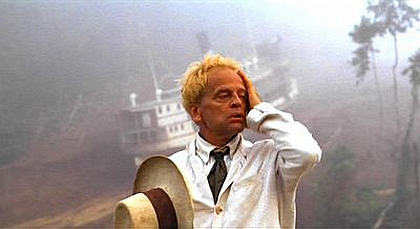 Actually, it’s the Count Basie season.  But the parallels are there.

In case you missed the 1980’s (and who could blame you, really?), Fitzcarraldo is an epic motion picture by the great director Werner Herzog, who insisted on living firsthand the madness he put on film.  In this case, he insisted on moving a 320-ton steamship over a muddy hill in the South American jungle, using pulleys, ropes, and a whole bunch of 5-foot tall natives.  Without CGI.  And with Klaus Kinski.  Try that on your next three-day weekend.

So Herculean was this undertaking that the legendary documentarian Les Blank made a whole ‘nuther picture about it called Burden of Dreams.  So next time you think your job is tough, chew on that one.  There was enough crazy there for two motion pictures.

Anyway, Herzog knew what he was doing.  It was his project, after all.  And it was almost as far-fetched as dragging nineteen of Austin’s finest and most in-demand musicians across 117 campuses playing Count Basie.  AKA my current obsession.

Don’t get me wrong.  This undertaking is not plagued by knee-deep mud, malaria-carrying mosquitoes, grumbling tribespeople, or Mick Jagger.  But it’s challenging, nonetheless.

But read down that roster again and realize that each of these gentlemen is probably in four other bands, frequently bandleaders themselves.  And then marvel at the ability to bring them all together to realize this project that will stretch across nine months.  That’s 270 days, give or take.

Of course, these school shows are all in the daytime, known to most musicians as When We Sleep.  But these guys don’t have time for sleep.  Many of them are educators, meaning they teach college classes or private students by day, play jazz clubs by night, and somehow still find time to do this project.  I’m humbled by their dedication to their craft and this addition to their already-bursting schedules.

Of course, we’re only three weeks in.  All sorts of mayhem may yet occur.

For my part, I have never spent this much time preparing for a season–almost a year’s worth of prep.  Most of the heavy lifting for reducing the original Basie arrangements was done by Paul Baker, who did a great job of making seven horns sound like fourteen.  But I had to advance-purchase those arrangements for Paul to work on, and plan the charts to some degree based on the available talent.  Then there were the fronts, ordered plain online and festooned with our logo, designed and printed by Bumperactive and put on by me after a crash course by Kyle on How Not to Screw Things Up involving sponges, water, a splash of dish soap, and an overcast day.  Not to mention the fundraising that made it all possible, thanks to a modest surplus from the Sonny Rollins season and our loyal donors stepping up with similar or increased funding levels in challenging budgetary times, when other arts groups are cutting back, scaling down, or closing altogether.

It sounded crazy when I presented it to our Board of Directors.  But here we are, ten months later.  The main work of fundraising, programming, hiring, rehearsing, and scheduling has been done.  We get to relax and play the gigs.

The FUN has BEGUN!