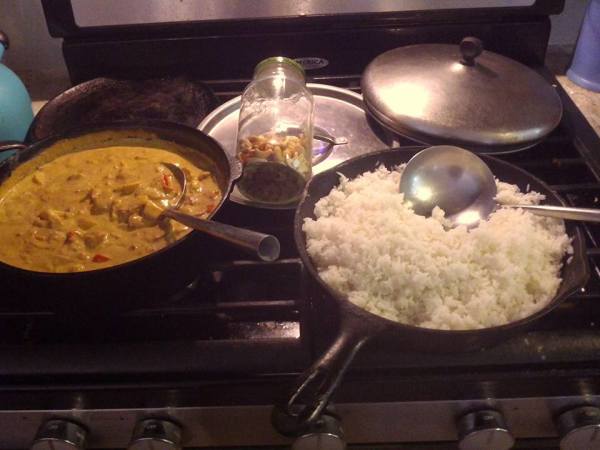 It’s always best not to let your dinner guests wander back into the kitchen.

First off, I know almost nothing about the true preparation of Indian food.  I have no Indian friends or even acquaintances.  I’m no longer a UT student, and in my neck of the woods, Indians tend to keep pretty much to themselves.  Which is just as well, because if they saw how I was cooking their national cuisine, they would be horrified.

Curry is the only Indian dish I claim to know how to prepare.  And no disrespect, but the large number of Indian curries seems to me to be the same basic spices in differing proportions, with one or two added or taken away.  Hey, I already admitted that I don’t know what I’m doing.

So, as long as you have coriander seeds, turmeric, chili pepper, cumin seeds, fennel seeds, cloves, cinnamon, garlic, curry leaves, salt, and cayenne pepper, then you’re in business.  And don’t think for a minute that I gathered all this together and ground it myself, oh no.  I just bought a 4-oz. packet of Curry Powder Hot from our pals at Sadaf (product of India) for two bucks.  True Indians grind their own spices, in proportions known only to them and passed down across twenty generations.  But who has time for that?

To make things even more prefab, I also use Patak’s Concentrated Curry Paste.  Although it comes in a variety of types, it’s basically the same ingredients as those listed above, with water and canola oil added as a base.  Their Biryani, for example, lists coriander, cumin, salt, sugar, spices (could be anything, I suppose), turmeric, chili pepper, paprika, garlic, and citric acid.  Not a lot of difference there.  So why use it at all?  Because Patak’s is dark, and wet, and chunky, and that’s how I like my curry.  Trust me, it adds body.

So, if you want to turn out curries that will wow all your non-Indian friends, follow these simple instructions.

Curry Powder Hot (or Mild, if you are a wussie.  Even the Hot doesn’t really cut it, and will need shoring up with Sriracha Sauce before we are done.)

White Potato (one decent sized one is sufficient)

*You probably notice that I haven’t put many quantities down in the Ingredients section.  That’s just how I roll.  Sorry.

1.  Cook some white rice.  Basmati is good, or whatever you prefer.  Use whatever method works for you.  (Whoa, he left that out of the Ingredients altogether.  What the hell?)  Like I said, roll with it.  Cook a full batch, you’ll want leftovers and there’s nothing worse than leftover sauce with no rice.  That sets up a nasty cycle that can take years to break, if ever.

2.  The rice takes a half hour, including letting it simmer for 15 minutes and then sit for 10.  Plenty of time to make the curry part.  Hey, Made Easy, right?  Ammiright?  Awright!

3.  So, in a larger skillet, saute onions, potatoes, and cauliflower in the oil of your choice, as long as it’s grapeseed.  Dice the potato small, you want it to cook quickly.  The cauliflower is the main vegetable bulk, so use half a head, or the whole thing if it’s small.  Slice it thin.  If you’re using broccoflower instead of cauliflower…shut up and go away.  You’ve screwed the whole thing up, and you are now dead to me.  Go eat at some precious hipster enclave where they name their chickens after the members of Linkin Park.

4.  OK, so the rest of us are back.  Let that sizzle a bit, covered.  Meanwhile, core the tomatoes (three is good) and cut into coarse chunks.  How can you tell if they are coarse?  Read #3 above to them, and if they laugh, they are coarse enough.

5.  Before you add the tomatoes, throw in a couple tablespoons of the Curry Powder Hot (or Medium, ya wuss) from our pals at Sadaf.  Mix well.  Don’t let it stick on the bottom!  Careful, dammit!  OK, now in go the tomatoes.  Their wet will make a nice paste begin.  Keep stirring.

6.  Once they’re all getting warm and cozy, add the coconut milk, one or two cans.  The amount will depend on how much vegetable bulk you have and your personal preference.  I like to add enough to cover the veggies in the skillet.

7.  Stir well, reduce heat, try not to let it boil at the sides of the skillet.  But if it does, so what?  It’s not like someone’s gonna die.  Just keep stirring and reduce the heat, I ain’t feeling so good here.

9.  Throw in a pinch of salt, mainly to bring out the other flavors.  Turn off the heat and let it sit about five minutes.  Then stir again and taste.  Not hot enough, right?  Here’s where you make with the Sriracha like a madman.  Or madwoman, as the case may be.

10.  Spoon some plain rice in a bowl, ladle a generous scoop of veggie curry on top, garnish with toasted cashews.  Yeah, I hate cashews too, but they’re actually good here.  Kind of like cauliflower.  I don’t know why, but it works.  Cauliflower and cashews are two things that taste good in Indian food and absolutely nowhere else.

Voila!  Instant meal for four to six hardy souls, and all it took was thirty minutes.  And it’s even vegan, so feel free to invite over the smug and self-righteous.

Disclaimer: This curry may fool your friends, but if you are serving it to anyone from Thailand, all bets are off.  Those people are absolutely nuts when it comes to heat.  Best thing is to pass them the Sriracha Sauce and a spoon.  They will consider it ice cream, but it will buy you enough time to grind them some prik kee noo.  Just don’t get it on your naked skin, or anything else inside your house.