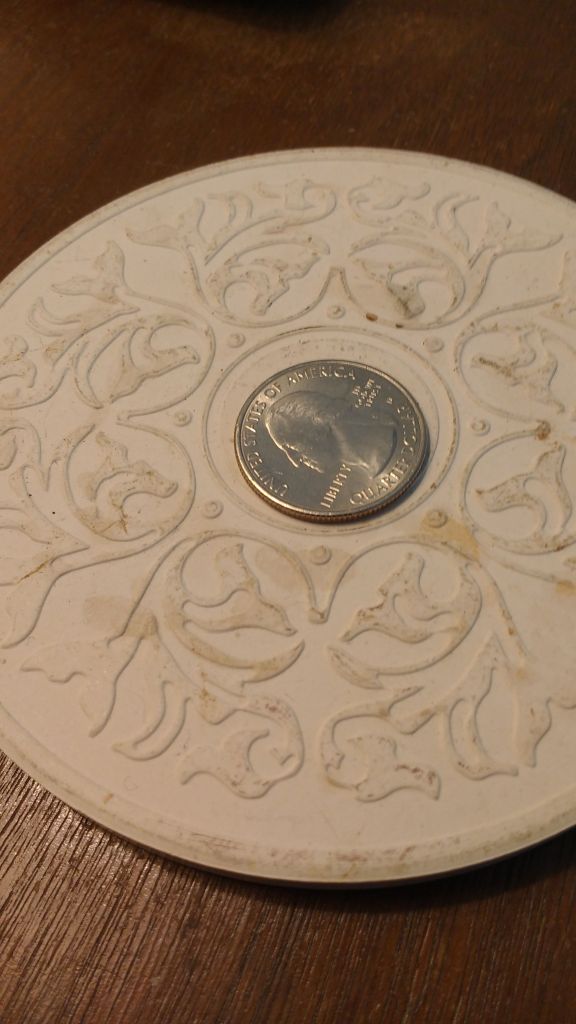 This is my quarter.  There are many like it, but this is mine.

For example: we played a school show a couple of weeks ago.  Not important where.  Let’s just say, one of the tonier zip codes.  We cover the waterfront with this project.

So we’re playing, and I’m bebopping my heart out for these youngsters.  The front row is a wall of third graders.  They tend to put the younger kids up front, so they can see.  The challenge is that sometimes they tend to get a bit distracted.  But that’s a teachable moment right there!  You make it engaging enough for them to keep focused, while they sit on the floor, criss cross apple sauce.  That’s a thing they say, where we go.

Anywho, most of the kids are riveted.  But there is also a little boy in front of me, a bit distracted, who is having a moment with his quarter, spinning it on the floor in front of him.  I think I’m soloing on “Donna Lee” at the time.  I notice that there is a little girl, also on the front row but in the next section over, and she is also playing with a quarter, spinning it on the floor in front of her.  The boy and girl are smiling at each other, and I realize I’m watching a little Quarter Courtship, separated by twenty kids who are watching the performance.  That’s cute, I think to myself, as I make the changes at quarter note = 220 bpm.

A few minutes later, as I’m playing the head out–fiendishly difficult at tempo, if you’ve never tried it–I notice some movement near my feet.  At first I think it’s a mouse, because we are in a cafeteria and it wouldn’t be the first time a rodent has scampered across my field of vision while performing.  One time years ago, on a night gig in Symphony Square, a rat ran across my foot on its path down the open tunnel adjoining the stage.  But I digress.

What I first took for a rodent was–you guessed it!–the boy’s quarter.  He had grown bored with spinning it and decided to roll it toward the band, which it neatly did until it hit the bottom of the keyboard and spun to a rest.  I didn’t look at it then, but glanced at the boy.  He was smiling broadly at the girl, and she was smiling back, and they were having a little shared secret moment.  Or so they thought.

The show continued.  I ignored the quarter.

Fifteen minutes later, the show ended.  The children stood up to file out in an orderly fashion.  At this point, I bent down and picked up the quarter, still not looking at the boy.

And dropped it into my pocket.

I continued packing up gear.  I saw the boy, standing in line, waiting for dismissal.  His half-smile said, “Hey!  My quarter is now famous!”  while simultaneously saying, “Hey!  I don’t have my quarter any more.”  Then his class was marched out, and soon it was just us again, packing up.

I told this story to the keyboard player, a guy who has played with pretty much every Texas big name in the industry, a guy who has been a professional for over forty years.  He took it all in, then said:

“You taught that young man a valuable lesson here today.  And all it cost him was a quarter.”

I thought so, too!  And although I’m not 100% sure what he meant exactly, I’m guessing it was something like:

“Don’t throw money at jazz musicians if you want to ever see it again.”

Or, re the girl:  “You should work this opening, kid, because you’re never going to get another again for such a small investment.”

Whatever the lesson, I hope he took it to heart!