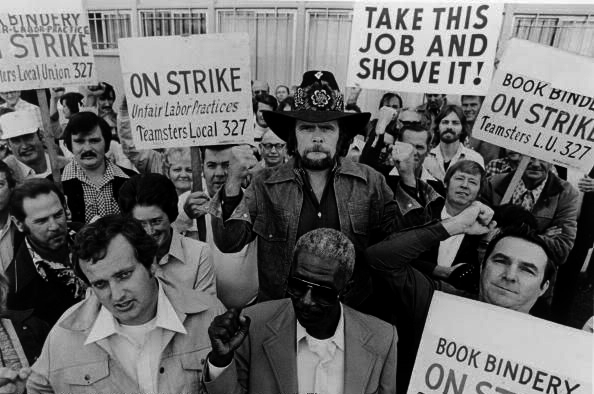 People on Facebook (I use the term “people” loosely, but that’s as close as I prefer to get) have been posting their first seven jobs, which got me to thinking:

Have I even had seven jobs?

Surely I must have by now.  So let me dust out the dark recesses where my brain used to be and see if I can come up with them.

This one I know for sure.  My first job was as an inserter for the Baytown Sun, our hometown newspaper.  What is an inserter, you ask?  Well, back in the early days of the printing press, all those annoying ad supplements you see in your newspaper had to be put in by hand, and it fell to our intrepid band of teenage miscreants to do it.  Our supervisor was a guy just a couple of years older we called “Roach” (I am not making this up).  Roach’s job, besides making sure we stayed on task, was to bundle the newspapers and tie them off so the carriers could pick them up for delivery.  Our one source of amusement (and there weren’t many, on this job) was to hide inserted bundles, stockpile them gradually to the end of the shift, and then slam Roach with a flood of piles he had to work through, since he was the only bundler.  Oh, how he cursed!  Oh, how we laughed!  Oh, how empty our lives were!

My first ‘real’ job out of high school was as a gopher for Cargill International, a multinational consortium of grain shippers and distributors.  I had to drive to and from Channelview TX into Houston twice a day on Interstate 10, carrying $4-million bills of lading and other stuff that it was best I not know about.  It was best Cargill not know that I was driving their service car 110 miles an hour on Houston freeways, to carve out a little extra time for stopping off at the Anheuser-Busch Hospitality Center, at the conclusion of their brewery tour.  Since the tour was self-directed, I managed to get through there at a pretty brisk clip and arrive at the complimentary  Brewski Room post haste.  I got fired from that job for some reason, I don’t remember why.

General Nutrition Center in Highland Mall, Austin TX.  By now I was a college student at the U of T.  GNC was the perfect job for that, because it had flexible hours and you weren’t likely to get all caught up in ‘giving a damn’.  I do remember one time Madalyn Murray O’Hair came in and bought some peanut butter that we ground fresh in the store.  Madalyn, if you can hear me: there was an old lady named Joyce who also worked there, and I think she may have spit in yours.  I do remember after you left, Joyce leaned in to me and said, “That woman just looks evil.”  I said, “What?  Looks like any old sourpuss to me.”  How was I to know that someday you would be buried in pieces on a Texas ranch.  Anyway, sorry to just getting around to telling you now.

The Austin Sun, precursor to the Austin Chronicle, selling print advertising.  This was my first and last foray into working in my ‘field’ of advertising.  It was a short stint, but I did manage to meet many of the Austin Hipnoscenti of the day: Dean “Buck” Rindy, Jeff Nightbyrd, Big Boy Medlin, and Michael Ventura, among others.  None of these people have had the slightest bearing on my life then or in the years hence.  It was a useful job, though, in that it showed me that I had wasted the previous three and a half years of my life, and untold thousands of my parents’ money, getting a useless degree in Advertising.  Also, once there was a nude pool party and I saw some boobies.

Selling vacuum cleaners for the Rainbow Corporation.  I kind of got sucked into this one.  (haha, JOKE)  But I did have some friends doing it, so I went through the training and everything.  On my first practice demo, I collared Jim Jones (not the famous dead one, but the former Executive Director of College Houses) and he sat patiently through my whole spiel, until the end when we got to financing.  Jim was a numbers guy, so he perked up for this part.  When I showed him the financing options, he said, “Mike, that’s usurious.”  “Why, thank you, Jim.  It was my first time,” I beamed, sure I was receiving a compliment.  (I did not know what ‘usurious’ meant, but it sounded important.)  “No, that means charging an illegally high rate of interest.”  “OH!”  I decided then and there to call my supervisor, sure that this was an oversight that he would immediately correct.  And he did, by firing me over the telephone.

Lakeshore Seafood, Oakland CA.  By now my UT days were well behind me, and I was putting my degree to good use by working for the next ten years in restaurants.  The first one was as a lunch prep/line cook for a little place in Oakland that was just a few blocks walk from my house.  How I loved this job!  It was mindless and sunny, just like California.  I worked with fun people.  I might be there yet, except there was one small problem.  The owner’s wife came in every day for lunch, hung out for two hours eating, and then would go in the lady’s room and have a thirty-minute episode of semi-public bulimia.  Did I mention this couple was Chinese and incredibly wealthy, with a string of Bay Area restaurants?  But somehow ours got lucky for the lunch crowd.  Maybe she went elsewhere for breakfast and dinner. <shudder>  Also, another little adventure at this joint: one day, an African-American homeless man came in and got about three feet into the doorway when our manager, a big guy, came charging up from the back and gave him the bum’s rush onto the sidewalk.  Coming back in, he said, “That was Huey Newton.”  Look him up, youngsters.  Despite popular myth, California is not always sunny.

A whole bunch of other restaurants.  Who came first?  Couldn’t say for sure, and Pete Townshend‘s not returning my calls.