OK, so maybe I’m not always the World’s Best Dad. 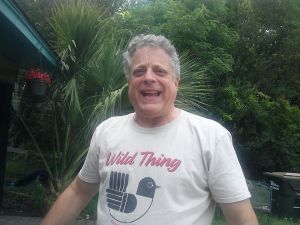 I try, OK?  And mostly succeed.  But every now and then, I remember something that gives me a pang of guilt.  A time when I could have been better, but just didn’t wannu.

Here’s an example: when our daughters were around eleven years old, we found ourselves going to a lot of Bar & Bat Mitzvahs.  In the Jewish faith, this is a rite of passage, usually at age thirteen, that signifies the transition from child to adult.  Bear in mind that thirteen was the age most young ladies married, once upon a time.  Boys waited significantly longer to marry, so they could outflank their wives by enough years to enter the union as the undisputed elder.

Undisputed–yeah, right.  This is a Jewish wife we’re talking about here.  No, the main reason the male waits is so that they can shuffle off this mortal coil ahead of his spouse, first providing for her retirement in Palm Springs with all the other Ladies Who Lunch.

But I digress.  In our modern age, we have done away with such necessities as getting married as a teenager in order to get started siring a brood to plow the fields.  And since families are smaller and adolescence is now postponed (in some cases, indefinitely), the Bat Mitzvah as a ceremony is now–well, largely ceremonial.

Get to the Bad Thing you did, I sense you muttering.  Younger I’m not getting here.

OK, keep your shirt on.  So since our daughters were of a particular age, they went to a lot of Bat Mitzvahs of their friends.  This gave them ample opportunity to see how big a deal (translation: $$$) some families made over this whole megillah.  And this may have gotten their hopes up, until they discovered how big a deal (translation: $) their own family was likely to invest when it came time for their own BM.

No, that wasn’t the Bad Thing.  It’s never too early to teach the lessons of frugality.

So, to the time in question.  The Night of the Bad Thing.

Younger Daughter and I were attending the BM of a very lovely young lady in our small congregation (I haven’t had to change the names, because I have forgotten all of them).  It was at an event facility in the Hill Country near Dripping Springs, so you could tell just by driving up that some major coin was being dropped.  And inside was all the accoutrements of young-teen bacchanal: a chocolate fountain, a photo booth, a DJ, a strobe light, a scrum of outnumbered adults surrounded by packs of squealing children hustling feverishly from one diversion to the next.

Oh yeah, there was a religious service too, but that was dispensed with as quickly as possible so the kids could get down to the serious business of chocolate-binging and doing cartwheels up the rustic walls.  The rabbi, seasoned to such shenanigans, delivered his bit and got the hell out of Dodge.

Of course, I had no choice but to stay.  So when I tired of the reception (15 minutes in, give or take), I escaped to the porch and found a rocker solitary enough to avoid human interactions (OK, I had to drag it a few dozen yards away from the other rockers) where I could watch the sunset in peace and let the madness unfurl inside.

No, that wasn’t the Bad Thing either.  My extrovert YD knows her father is antisocial, and in any event she was oblivious to me, as she was inside leading the conga line.

After seven or eight eternities, it was time to make our escape.  YD and I climbed into the car for the hour-long trip home.

OK, I’m getting to the Bad Thing now.

Around this time, I had just gotten a new luxury for my car: an XM radio.  I don’t know how I ever survived without it.  And subscriptions to the service are pretty reasonable, as long as you are willing to forgo frivolous expenditures like chocolate fountains and photo booths for your daughters’ Bat Mitzvahs.

We had a game for the car ride: we would take turns picking the channel we listened to.  The catch was, you could only listen to one song and then it was the other person’s turn to choose.  Seems fair, right?

Anyway, the band names are irrelevant because all the songs sounded the same to me: awful.  But making a stab at being an OK Dad, I let her pick the first song.  And endured all three minutes of it.

Then it was my turn.  I knew jazz would instigate a major revolt, so I turned to the Oldies station.  Being an Oldie myself, I figured it would be a good bet.

Sure enough–pay dirt!  From the speakers came the unmistakable guitar wail signaling Quicksilver Messenger Service’s cover of “Who Do You Love”.  Folks of a certain age will know that this song is 25 minutes long.

I knew it too, but said nothing.  What a Bad Dad I was!

So on we drove through inky country roads, with my cobra snake for a necktie, drinking from a human skull, and all the other wonderful imagery dropping into my innocent daughter’s subconscious.  YD was rolling with it, still coming down from party adrenaline.  Once or twice she seemed like she was about to notice the song was going a tad long, so I would throw in an innocuous observation about the party and divert her.  Yes, definitely a Bad Dad–but every minute spent with Quicksilver was a minute not spent with Nickelback, so I was willing to rationalize it.

Finally, we got to the point in the song taken from a live performance with the band yelling back and forth at the audience.  In case you forgot, this is where the recording engineers decided to do a nifty little ’60’s trick called Turn The Pots All The Way To The Right, and Then To The Left, and Then Back Again.  This is what passed for advanced studio engineering back in the day.  It’s almost like everyone was…never mind.

This happens right around thirteen minutes in, and it sounds something like this:

And so on.  But the problem with my car was that there was a balance issue, owing to the fact that the speakers on the right were kind of blown.  So it sounded more like this:

Nothing was going to distract YD this time.  “HEY, is this still the same song?”

Reluctantly, I yielded my turn.  Even though, technically, it was still my turn.

OK, maybe this does not seem such a Bad Thing to you.  In the overall scheme of things, I don’t suppose it is.  But at the time I felt like maybe I was kind of Bad?  Because of sort of a Deception?  And she was so Trusting?  And maybe she would now question whether that Trust was Misplaced?  And after all, wasn’t I her Dad and should be Building Trust?  Instead of sort of Tricking Her?  Just to avoid Nickelback?

So it was her turn again, and we listened to another horrible song by Hoobastank that I endured all three minutes of.