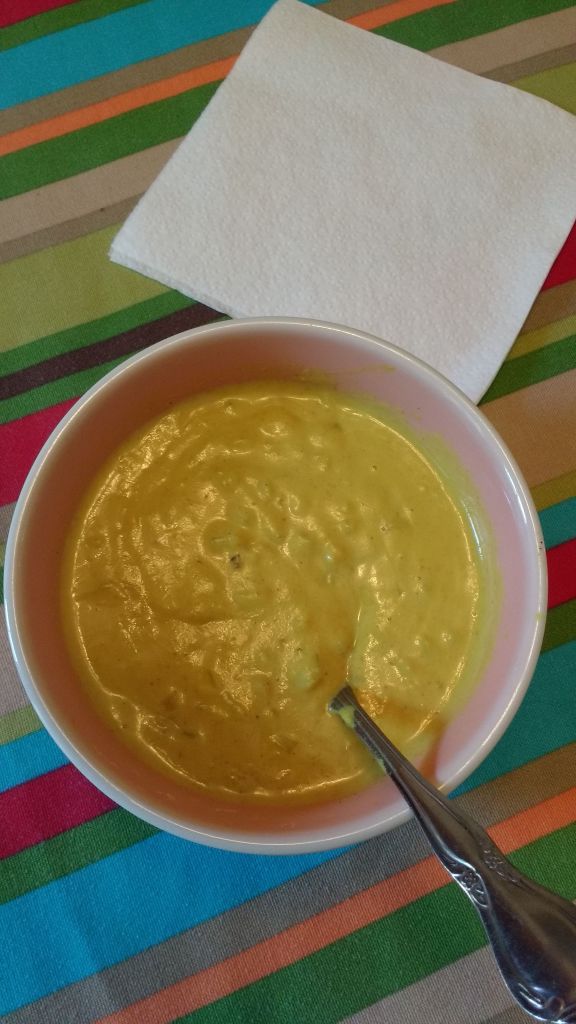 One Mystery Meal, comin’ up!

Now that I have changed what I allow myself to eat by a factor of–oh, let’s say a zillion–I have assumed responsibility for preparing virtually everything that goes into my mouth.  We may eat out occasionally, but even then I am very careful when ordering, to the point of deconstructing the menu, sometimes to the bewilderment of the waitstaff.

They usually try to be good sports.  But sometimes they look at you like, “Why are you going out to eat at all?”  I don’t always have a good answer, other than a head nod across the table: “(S)he wanted to.”

But most of what I consume, I prepare.  And just because I’m a decent cook doesn’t mean I don’t sometimes get sick of my own cooking.  Usually I prepare something that can keep, like soups and salads, and alternate them for a few days running.  This is supplemented with proteins like chicken (skinless, but broiled–no sense in torturing myself), hard-boiled eggs, nuts, soy & almond milks, tahini, and tofu.  It’s better than it sounds, I promise!

Yesterday morning, I decided to make up a batch of Curried Cashew Cauliflower Soup, something I have made before and blogged about here.  But it being morning, I just didn’t want to put anything into my mouth.  I’m not a coffee drinker, but I do sympathize with their morning dispositions.  Not being able to blame it on caffeine addiction, I guess I’m just mean-spirited until I get a chance to warm up.  Maybe even after.

I whipped up the soup, but didn’t want to taste anything.  So when it came to spicing, I decided to wing it.

At this point, I should mention the soup I was preparing was not much like the one I previously blogged about.  This one started with sauteed garlic, and no leeks were involved.  And the curry powder by itself had proved to be a little insubstantial, so I beefed things up by adding turmeric, coriander, cumin, mustard powder, ginger, cayenne pepper, and salt.

Here’s where things could get dicey.  That’s a lot of spice to go fillying about with.  And from past experience, it doesn’t pay to be shy with anything other than cayenne.  So I was a liberal shaker, whisking as I went.

After a minute or two of whisking, it had turned a beautiful pale-gold color.  A bit too pale.  More turmeric!  More curry!

When it looked right, I covered it and moved it off the burner to cool.  And once cooled, I put it in a plastic container and placed it in the fridge, still without tasting.

There was a time when I never would have dared not to adjust seasonings in a big pot of soup (I think we refer to that time as “last week”).  But I just decided to take it on faith that I had done everything right, and it was already as perfect as it was ever going to get.  And it being soup, we won’t know until tomorrow anyway, right?

Right!  So Today is the Tomorrow You Blew Off Yesterday.  And it’s lunchtime, so out comes the soup.

OK, looking good as it heats.  Smelling strong…too strong?  Stirring spoon still has the finish on it, so that’s a good sign…no flying insects have swooned into the pot…

After letting it sit long enough to take a picture of it (hey, I’m hep to the ways of you young people), I gave it a taste.

Absolutely delicious!  But not how I was expecting.  The familiar flavors had coalesced in a way that was more delicate and less hot than it would have been, had I imposed my will during the seasoning process yesterday.  Now the soup was evocative of something different, something almost…motherly.  If my mother had been Indian.  And had cooked.  And had been alive.

It has me thinking of the thousands of opportunities for surprise that we lose by imposing our intent instead of trusting the moment.  I mean, I know how to cook, but it’s all in the balance.  And what if you gave that part away, and just went with your sense of sight instead of taste?  Or even your sense of touch?  It might take you to a whole new experience.

Of course, it’s highly unlikely any of that can ever be replicated.  But if you want permanence, you’re in the wrong kitchen, baby!